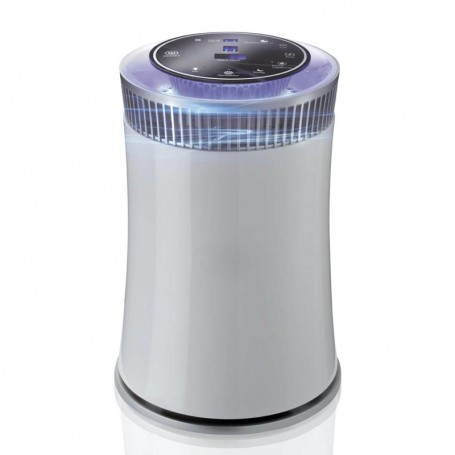 It purifies the air in homes and businesses with 5 filter intensities and 4 filter levels: pre-filter, activated carbon filter, HEPA filter and germicidal ultraviolet lamp. With air purity indicator. It can be programmed up to 24 hours and has a negative ion function to eliminate the static caused by electronic devices and offer comfort and well-being similar to that achieved in natural environments. It is essential for people with allergies, respiratory problems of all kinds, asthma or COPD. Due to its high efficiency filter (PM 2.5) capable of eliminating up to 99.99% of harmful particles, this air purifier prevents people from being infected with viruses and bacteria in indoor environments through aerosols.

This air purifier has a quick and easy touch control to use. It uses ultraviolet light to purify and totally eliminate fungi, germs, bacteria and viruses and odors. It has 5 filter intensities and a special activated carbon filter with 4 filter levels:

It has an intelligent warning by light that indicates the purity of the air through color changes. Its pollution sensor detects the quality of the air in the environment. You have the option of activating the emission of ions that intensifies the purification of the air, thus multiplying its efficiency. A general status indicator of the filter indicates the status of the filter at all times. It has an easy and fast maintenance, only replace the filter when its indicator warns us (1 time a year approximately).

The ultraviolet lamp generates a cleaning and filtering system and manages to reduce to the maximum any external harmful agents that remain in the air such as viruses, bacteria and fungi. Ultraviolet radiation damages the DNA of microorganisms and prevents them from reproducing, thus eliminating them without leaving residues unlike chemical products.

That help to separate and eliminate the dirt lodged in the environment as much as possible. They are just as important as the vitamins in food and are therefore called "air vitamins" or "air cleaners." They have positive effects on human health because they neutralize acid levels in the blood circulation. Due to their negative charge, they are able to absorb dust, bacteria, viruses and other harmful particles that have a positive charge by neutralization.

It prevents the spread of impurities in the air and reduces the presence of alerts and particles in the environment, achieving greater air purity to achieve the maximum well-being of people, especially those who suffer from some type of allergy or respiratory failure.

It has a timer that allows us to select the time we want the purifier to be working. Being able to program it from just 30 minutes to 24 hours of continuous operation, when the end of programming the purifier will stop working.

Likewise, it has a fan with 5 powers that is regulated automatically depending on the level of contamination present in the room to be purified. This fan can also be regulated manually to section the ventilation level that interests us the most. 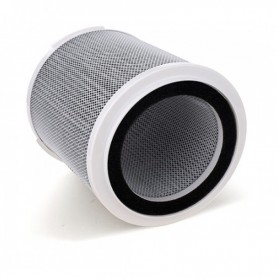